Female Self-Interest Vs. The Pursuit Of Wisdom 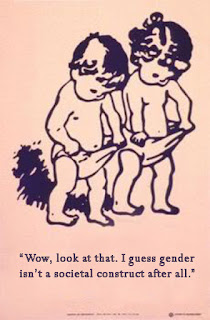 There's a subject I've been wanting to look at & write on for awhile now, though it's something that is hard to put into words, & is such an emotional minefield to try speak openly in, I'm not sure I ever will, or maybe this is me doing that right now.

Loosely speaking, it concerns the differences between women & men & their differing approaches to the larger truths - & of the drive to follow those truths at the expense of all else, & regardless of the cost to the self & for no other reason or reward than itself.

And how it is that women, as a general rule, have little inclination to do that, which is why women (again, as a general rule) don't start religions, or write symphonies, or start revolutions in art or science or philosophy, & the only political movement begun by women in the history of the world is feminism, by far the most selfish, short-sighted & dishonest political philosophy ever devised by humankind, demonizing one whole half of the human race while pandering to the herd instinct of the other & shamelessly lying to them both.

The need for group identity seems to me to be stronger as a rule women, which does raise troubling questions when thinking politically, (whoah! here we are at that minefield I was telling you about!) as it may be that women are, as a demographic, more easily manipulated by those looking for power - as historically they have been - by appealing to their own self-interest & immediate concerns of themselves & their children rather than higher, selfless ideals for the good of all. 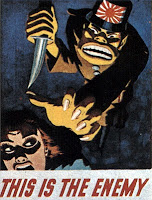 Men have always been manipulated too, as demonstrated by all the rape propaganda used by every side, for every cause, in pretty much every war there's ever been. Through their innate concern for women, men can be made to go die in a trench, start fights, organize lynch mobs, risk their own lives & safety, & vote for policies which have directly adverse effects upon themselves & put their own interests last.

But the same does not work in reverse: women will not risk their lives for those of men they don't know. Women will rarely risk their lives for anyone but their own children. This, of course, is simply nature, just the way we evolved to be, & women's innate drive for self -preservation (& hence the preservation of their offspring) is one of the things that has made humanity the most dominant species on earth.

The point is, there's a difference, & a double standard. And it's one I don't actually mind being there at all - like most men, it is innate in me to want to put the women & children first, but we live in a society where that noble imbalance is ignored & even shouted down every single day. We are instructed to act like there are no differences between men & women, even though we all know that there are. We act like it is a sin to even acknowledge this double standard, & keep giving even more help & assistance & special treatment to women than we were doing already, all the while acting as though the opposite is true, that women are oppressed & held back by that black nightmarish fantasm the feminists dreamt up & called 'The Patriarchy'.

What the feminists call 'Patriarchy' is, of course, to all intents & purposes simply 'civilization' - all civilization - as there has never been found any society either now or in all recorded history, anywhere in the world, any society in which men did not hold the majority of the positions of responsibility. Given our differing biological make-ups & requirements, it has always made the most sense to most peoples to configure their societies that way.

If men really were the greedy, heartless oppressors of women depicted by feminism, they would surely never have voted for the enfranchisement of women in the first place. But the important point is, since then, women - the entire female demographic - have never used that vote even once to aid 'men' as a group. Men are still popularly seen by perhaps the majority of women to be The Enemy, even the men they live & work alongside. This sexism is considered healthy, harmless, even funny, & all society encourages it.

Women never vote against their own self-interest. And, because of how much men innately want to both please & protect them, they have never had to.

I'm not saying women en masse can't be noble or self-sacrificing or whatever, only that those muscles may perhaps have atrophied over time through lack of use. Evolutionarily, they became inessential for women to survive, & besides, they had men to do all that hard work, & make all those hard decisions, for them.

Justice, Liberty, Equality - civilization - these are all male creations, borne out of male modes of thought. On the other hand, Comfort, Kindness, Consensus decision-making, Community... society (the social world).. these may well be less easy to define, undervalued female contributions, along with perhaps even language itself, or at least the language of personal relationships. All these are a much-needed tempering force to balance out the strict, ascetic male principles that created working human civilization, but when left unchecked, or even encouraged, as they have been the past hundred years  - & especially the last 40 - they can themselves become a detrimental & destructive force.

Getting back to the point - such as it is - there are innate, clearly observable, evolutionary-based differences between men & women that skew much rational dialogue between them. Every now & again I am reminded that we really might be from Mars & Venus, though sharing the same language. Repeatedly, I think I'm having a nice, reasonable discussion, pooling resources, sharing ideas on politics or philosophy, & suddenly a woman stands up, face white with fury & tears in her eyes, marches out of the room & slams the door, goes off to break things in the kitchen & never talks to me again. This shit really happens to me. I remember one woman, the girlfriend of a friend of mine I gently questioned about some of her (frankly hateful) feminist statements, pushed herself back in her seat, crossed her arms & said (to her man) "okay, I'm not saying any more until your mate gets his gender politics put right".

And I thought: 'That's genius! What she is saying is: "I REFUSE TO ARGUE WITH YOU UNTIL YOU AGREE WITH ME!" What a perfect method of debate! No-one could ever make you feel even the littlest bit uncomfortable in your beliefs ever again!'

Anyway, the maddening thing is the women that do this usually don't realize, or refuse to realize that they are even doing it, often vehemently denying they are becoming emotional while in the same breath attacking personally & ending all discussion. On the internet, especially, I find girls continually derailing reasoned discourse to interject ad hominem attacks, use shaming language, & appealing to others around to come to their aid. Making the impersonal personal. Women often seem to have a harder time than men seeing that there could be a difference between the wider truth of a situation & their own felt experience, or what their particular group mind has told them they should believe.

I never used to think this way. I used to do my very best to believe women & men were interchangeable units & that the only reason women as a group hadn't been able to create anything much of great or lasting value was because of a universal conspiracy against them to keep them down.

I know! Crazy, right? Well, I was young.

I do see some extraordinary women who seem to me possessed by genius but there's not a lot of them, & every single one of them is working in a field opened up by men, within a conceptual framework invented by men. Genius is male, & the initial spark of creativity, courage & invention emanates almost exclusively from the masculine.

The first person to get to the North Pole, for instance, or even the moon, or to sail a balloon around the world, was always going to be a man. Later, once it had been shown it could be done, repeatedly, & in relative safety, then a woman would climb into the cockpit of a plane, or fly a hot air balloon, or go up into space. The Wright sisters getting that crate off the ground was never going to be a possible future, regardless of differences in opportunity or the structure of society. And if we try to look rationally & objectively at the weight of evidence throughout history, we must recognize that as a simple truth, beyond any conspiracy theories of women's oppression. I'm not trying to rub anyone's nose in it by saying this, I guess all I'm wanting to do is try get women & the men in western society to consciously acknowledge these complimentary halves of the whole & to factor them into their models of the world. We need to be able to speak openly of the things we can see with our own eyes to be manifestly true.

There's an Australian YouTuber, Kelly Jones, who has gone into some of this in a few of her pieces recently, usually from the perspective of a psychological analysis of religious experience - which is of course interesting in itself, but this video in particular I felt went some way in expressing much of what I've been thinking myself on these things. Check her out, she has soothing voice & a sharper mind than mine:

And this one addresses matters even more bluntly: