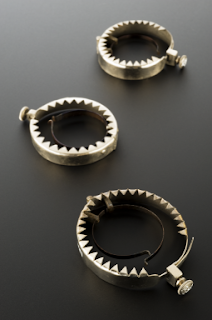 The news a week or so back that the UN & WHO plans to encourage the genital mutilation of 28,000,000 African men to ensure that they don't contract HIV (That's right: circumcised men can't catch AIDS) made me think a post about the whole bizarre phenomena might not be amiss.

Being English, circumcision has always seemed a rather strange, foreign & frankly barbaric practice to me. Until a couple of years ago, I, like many others, believed it an almost exclusively Jewish religious practice, & had literally no idea that as many as 60% of all American males had undergone genital mutilation.

How did this come about? How did one of these come to be seen as the ultimate horror to all civilized folk & the other a respectable 'medical procedure' in the most powerful country in the world? Why did America of all places adopt such a practice when the rest of the developed world continued on as perfectly happily without it as they always had before?

In America, though, a different approach became widespread thanks largely to John Harvey Kellogg, an American medical doctor - & yes, the guy who invented the cornflake. Wikipedia tells us:

In his Plain Facts for Old and Young, he wrote: “ A remedy which is almost always successful in small boys is circumcision, especially when there is any degree of phimosis. The operation should be performed by a surgeon without administering an anesthetic, as the brief pain attending the operation will have a salutary effect upon the mind, especially if it be connected with the idea of punishment, as it may well be in some cases. The soreness which continues for several weeks interrupts the practice, and if it had not previously become too firmly fixed, it may be forgotten and not resumed... ”

As an alternative to this he also recommended


“..the application of one or more silver sutures in such a way as to prevent erection. The prepuce, or foreskin, is drawn forward over the glans, and the needle to which the wire is attached is passed through from one side to the other. After drawing the wire through, the ends are twisted together, and cut off close. It is now impossible for an erection to occur, and the slight irritation thus produced acts as a most powerful means of overcoming the disposition to resort to the practice ”


Well, the long & the short of it is that Kellogg's ideas took off, & in America became the norm. Circumcision became accepted for men raised there - as it had been for Jewish men for countless generations - as something your parents did to you as a child 'For Your Own Good' - because they cared for you - & continues to this day to be referred to as a 'medical' procedure, even though for practically all of the infant boys who are made to suffer the ordeal, there is no medical reason or benefit to it whatsoever, & in fact introduces life-threatening dangers: in America more than 117 boys die of complications arising from circumcision each year.


Returning to the initial topic, here's the thing:


The U.S has the highest rate of HIV infections in the western world, yet also has the highest rate of male circumcision of all developed countries: clearly, circumcision does not prevent the spread of HIV. It seems likely that whatever health benefits show up statistically are more likely to be related to the religious life an orthodox Jew or Muslim is practising rather than the act of circumcision itself. It seems also likely that the impetus for the WHO program is coming from sources with a religious &/or imperialistic agenda. The whole thing is very strange, very scary, & very suspicious too.

Please don't mutilate your children. And please don't support the mutilation of other peoples children, either.