The Troubling Misandry of Buffy The Vampire Slayer 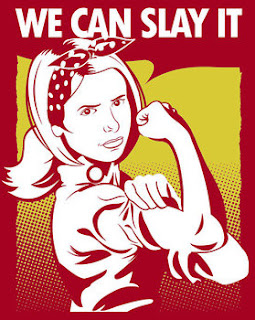 So here's the thing: Buffy The Vampire Slayer is possibly my favourite TV show ever, equalled only perhaps by The Sopranos for its grand scope & depth, its balance of humour & pathos. Always surprising, always inspiring, always human & humane - "talking about monsters to talk about people" is how its creator, Joss Whedon once described it.

Joss Whedon is the Charlie Kaufman of television - the most brilliant single mind of that particular medium. And he does what he does there better than anyone else has ever done, I would say.

So what's the problem? Well, the problem is that Buffy is a show that even its creator describes as having an overtly feminist agenda, & in fact that is true, it does. And feminism is a hate movement. Which inevitably leads to misandry - a contemptuous disregard for men's suffering & humanity. So you see my problem.

Paul Nathanson & Katherine K. Young define a misandric film or TV show as one in which the men are all depicted as being either evil (Spike, Angelus, Oz-when-werewolf, Warren, The Master, all the bad guys) or inadequate (Xander, Riley, Oz-when-human, Giles - how many times does Giles get knocked over the head, by the way?).

There are no 'empowered' men in Buffy The Vampire Slayer. The only male characters that are strong & self-possessed are monsters & demons, & so, by definition, evil. Angel, the wettest & most self-flagellating beta-male in all sci-fi & fantasy, only comes alive once his soul is returned to him & he becomes the murderous Angelus. But of course then he is, again, Evil. The message being, to be a strong man makes you the bad guy. Oz & Angel & later Spike have to struggle constantly to remain 'good', to behave themselves for fear that their innate, true 'evil' [male] self will escape. A man is defined as good only to the extent that he helps & facilitates the needs of a woman, in this case Buffy, the entitled centre of this world, that all of the other characters flutter around like butterflies.

There is also a third category, of 'honorary women', granted to a very small number of men, usually black, or gay, who are given a little more leeway because they're seen to be from another 'victim' class, & so similarly oppressed by The Patriarchy. True to form & by the book, the only human male in the entire seven year run of the show who is shown to be physically strong, confident, self-possessed yet good is the black principal Robin Wood, who appears in the final season.

The women, on the other hand, are all basically good-to-go: they start from a position of presumed innocence, & are not required to work on themselves or accomplish anything to earn our (the audiences) concern & empathy. If in the unlikely event that they do do something 'bad' (Faith murdering people, Willow trying to end the world) there's always an understandable reason why, & we want them to be given a second chance, we want them to be looked after, & helped. Even the 'bad gurls' like Drusilla & Darla are given terrible backstories of victimhood (at the hands of men, of course) that led to their evilosity. No woman, it seems, is simply born bad. That's something that can only befall a man.

Warren, a human male we are told is a hater of women, is presented to us as an irredeemable monster. Anya, a female demon who has tortured & murdered men for a thousand years, is shown as light relief. As always in the feminist narrative, male violence against women = Horror. Female violence against men = comedy.

Buffy & Faith & all the other slayers have their superpowers, Willow (the most powerful witch in the world, let us not forget) & Tara have their magic. What do the men have? Even such lightweight characters such as Cordelia or Dawn are shown to be as good at fighting as the male 'scoobies', though this bears no resemblance to the reality of any known human society.

So, for instance, the 7-stone stick insect that is Sarah Michelle Gellar routinely beats to a pulp burly men literally twice the size & weight of her, laws of physics be damned. And without ever picking up even a scratch on that perfect face.Yes I know that it's a metaphor for grrrl power & taking back the night & blah diddy blah blah, but what kind of message is that sending to young girls? That if you pick a fight with someone twice your size you're not going to get hurt? That you should pick a fight with someone twice your size?

One of the scariest things about telling girls it's okay - 'empowering', even - to hit boys is that in our society, girls greatest defence against boys is that Boys Don't Hit Girls. And that's a good thing, because boys can hit a lot harder than girls. But the more that girls get told it's ok for them to hit boys, the more that girls are taught to behave like boys, the less likely that golden rule is to hold. If boys get punched in the face by increasingly aggressive females enough times, eventually those boys will hit back. And that's not good, a genie that would be hard to get back in the bottle.

Whedon has carried these ideas of The Überwoman over into his other shows, such as Firefly (Zoe), & Dollhouse (Echo) - human women who can kickbox all comers in high heels & leap a tall man in a single bound. Mortal women as physically strong as any man.

These women don't exist, nor will they ever - not as long as they are women, not without a ton of steroids or genetic modification. It's wishful thinking, & a very strange kind of wishful thinking: the idea that you can or should want to change the laws of nature to fit in with the perceived reality of a presently fashionable ideological movement.

Men the world over are bigger, stronger & faster than women, more heroic & self-sacrificing in an emergency. Every society encourages the sacrifice of the men on behalf of the women, & always has.

If you were to examine all Olympic times for men & women since records were first kept, you would see there is a reason why men & women are not made to compete against each other: if they did, no woman would ever win anything. The times of the guys who come in fourth or fifth will still trump whoever gets the gold in the women's events. Men can jump higher, run faster, throw further.


These are innate & immutable physical realities. Men are stronger than women. That's simply how we're built, & any healthy society would see that as a good thing. A strong man should be a good thing to find. If you were trapped in a burning building with a broken leg would you rather have Sarah Michelle Gellar (who plays Buffy) or Nicholas Brendon (who plays Xander) try carry you down a three storey ladder?


In addition to this insistence on the physical supremacy of women, the smartest, most technically minded characters in the Whedon-universe are female too (Willow in Buffy, 'Fred in Angel, Kaylee in Firefly, Claire Saunders & Bennett Halverson in Dollhouse). Again, this bears no relation to the world as it is: women as a group have very little interest in higher mathematics or engineering, as reflected in the percentage of course enrollments at universities.

At Harvard University, there is a class widely held to be the hardest undergraduate maths class in the country: 'Math 55'. Every year around 50 students enrol & more than half of those drop out within the first 5 days, it's that hard. After a couple more weeks the class settles down for what it will be for the rest of the semester: 45% Jewish, 18% Asian, & 100% male.

Now, there is nothing stopping any woman from signing up for that class, & with the present education gap, more women are leaving higher education with degrees than men by a large margin, so either women are choosing not to do higher mathematics, or are trying & can't. Either way, the portrayal across the board of the greatest mathematical or engineering minds being female is (again) a case of wishful thinking on the part of an ideological position that bears no resemblance to the real world young women have to go out & make their way in. As with the depictions of female violence, I don't see how this helps anyone.

The times we live in are the water we swim through: we can't see them, & even the best minds bend to them & obey, at least some of the time. The nineties was a feminist age - Whedon probably believed when he made Buffy that rape was a major epidemic; that 1 in 4 women were being dragged into bushes & raped daily; that domestic violence was a crime that only men inflicted & only women were the victims of; that women were getting paid 70¢ for every dollar a man made working the same job & so on & so on. He was wrong but he meant well, & was just trying to do the best he could with the information he was provided with, so it's hard to think bad of him. And for all I've said here he made a great show.

Aww, maybe I just think too much. Breaking Bad is nice, too.