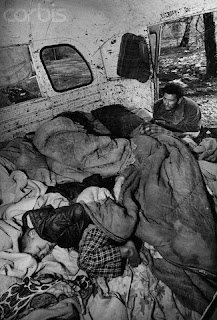 Arguing with Feminists can more often than not get you to feeling like you're on a doorstep debating with a born-again Christian whose entire argument is 'But surely you must believe Jesus died for your sins?'

The good thing about arguing with feminists is that it can occasionally force you to go away & do the research for yourself. Not that it will alter their opinion even one little bit, of course, when you present it to them, but it's good to know of what you are speaking - the evidence, the stats, the facts & the figures behind the position that you hold - rather than simply singing along with the words like everyone else.

As an example: recently I was responding to a feminist online & used the well-known (to regular readers) figure of 90% of the homeless being men. She questioned it, & I realized that, although I'd used that particular figure a bunch of times I'd never tracked it to its source before. So I took a look & thought I would list my findings here as a resource for those interested.

In the UK both the Scottish Government's Homelessness Monitoring Group's 2004 First Report To Scottish Ministers & the official homelessness statistics from CRISIS 2006 (source: p.29) give the figure as 80-90%. In North America two sources from the year 2000, Homelessness: The Making and Unmaking of a Crisis by Jack Layton & Barbara Murphy's On The Street: How We Created Homelessness give the figure as 70-90%. There seems to be a little more variation in the U.S figures generally, I would imagine stemming from that country's much larger size, & studies being done in different states rather than nationally.


A 1985 study by the university of California said that 96% of adult homeless in San Francisco were men, but less in some other cities, working out as an average of 85% nationwide (Richard H. Ropers, “The Rise of the New Urban Homeless,” Public Affairs Report (Berkeley: University of California/Berkeley, Institute of Governmental Studies, 1985), October-December, 1985, Vol. 26, Nos. 5 & 6, p. 4, Table 1 “Comparisons of Homeless Samples from Select Cities.”)

Another source: “Data collected for the 2004 U.S. Conference of Mayors survey showed that in almost all cities surveyed, single males greatly outnumbered single females among the homeless. Single males were most overrepresented in Nashville, Tennessee (79% of the homeless), followed closely by Santa Monica, California (72%), Miami, Florida (70%), and San Francisco, California (69%)” (source: Libraryindex.com). This is a very high percentage but lower than 90%. However, this study refers only to single males: if males in other groups (married men & children) also outnumber women then the total figure of male homelessness would be noticably higher.

A commonly stated figure which pops up repeatedly when googling about this is 68%. Still, obviously, a great inequality, but that number originates with the U.S. Department of Housing and Urban Development & refers to the number of homeless ‘clients’ - i.e the percentage currently being worked with & sheltered by that organization.

There are other factors which make it hard to get a definitive answer: a father with children, or even wife & children, often comes under the heading of ‘families’ - which tends to be classed seperately - so it muddies the water even further. Wikipedia says there are 41% single males to 14% single females. It also says “In 2008 in one sample, women represented 26% of the respondents surveyed” [my italics], which obviously only relates to whoever filled the survey in but still, would presumably mean that 74% of those were male.

My point in listing these differing reports is simply to say we can't know for sure what exact percentage of the world's homeless population is male. There is no single statistic: there will be considerable variation between different countries & even areas within those countries. And it's a big world, but I haven't been able to find any figure anywhere that says men are less than two-thirds of the homeless, & the generally accepted government & charity organization estimates, as I stated at the beginning, do seem to be generally in the region of 80 - 90%.

In my own personal experience (& most likely yours too) living in different cities in England the last 20 years or more, easily 9 out of 10 people I see out on the streets are men. In fact I can’t remember the last time I saw a female beggar, though I always see at least five or six men panhandling every time I cycle into town.

So there we go: doesn't that feel better? To actually know what you're talking about?

It's a good feeling. I recommend it.

Email ThisBlogThis!Share to TwitterShare to FacebookShare to Pinterest
Labels: Homelessness