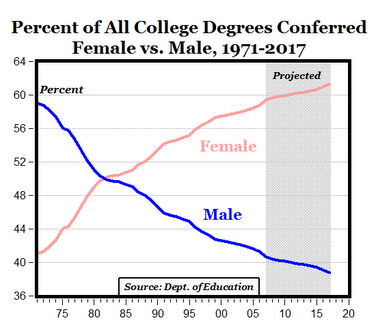 
It's now official: Women dominate men at every level of higher education, in terms of degrees conferred. Here's the breakdown for graduates of the class of 2009:

The full U.S Department of Education figures are available here, please take the time to give them a look:
http://nces.ed.gov/programs/digest/d07/tables/dt07_258.asp


There are two things that immediately leap out at me from this: First of all, it's somewhat surprising to find that even as far back as 1869, something like 1-in-6 Bachelor's degrees were being received by women in America - a relatively small number, admittedly, but higher than I would have expected from that time. The popular image we generally receive is that pretty much until the 1970s all women were forcibly kept away from any kind of higher education. But that seems not to be the case: even by the 1920's - i.e. even before American women "Got The Vote" - more than half as many women as men were leaving colleges with degrees, & that percentage rose every year up until the end of the 1970s, when it became equal.

And that's the other thing that surprised me: just how long the present-day inequality has been going on: Women began to outnumber men from the beginning of the 1980s onwards. And this gap has increased every year up until the present & beyond.

Men are now in a worse place educationally than women were before the 1970s. Clearly something is very wrong with either the teaching methods used or the environment they are used in. Or perhaps there is simply discrimination at work?

Why are boys failing at school? Why are young men dropping out of college? And why does no-one care?

This is yet another pretty damning refutation of the belief that feminism is, or ever has been, 'about equality'. If feminism were truly 'About Equality' then it would necessarily be the duty of every self-proclaimed feminist to speak out at every opportunity against this disparity, to drop whatever else they're doing & devote their time & energy to this injustice until those numbers are equal again.

And anyone who believed in 'equality' would surely have to agree.

Email ThisBlogThis!Share to TwitterShare to FacebookShare to Pinterest
Labels: The Education gap