The Biological Imperative Of Female Self-Preservation In Action Movies 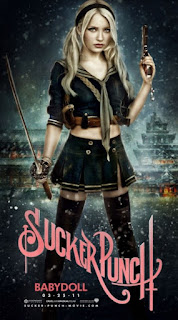 Something I’ve been musing on lately is how all the ‘girls kick-ass!’ movies so common today are almost entirely created by men – Buffy, Dollhouse, Kick-Ass, Kill Bill, Salt, Sucker Punch (most misandric film of the year), all the superheroey ones... All are repeatedly sold to us as ‘empowering role models’ etc for girls & yet the strange thing is it’s not women that are writing & directing them, it’s men. These films are predominantly watched by males, too - women may like the propaganda that they can 'do everything as well as men' but for the most part would much rather be home watching Sex And The City & Twilight.

So I've been puzzling over why this should be & the conclusion I have come to is that, under the system we have had the past 30 years or so, which denigrates masculinity to such a horrific degree, male creators have resorted to using female protagonists to play out their heroic ideals, ideals which, in the real world women would not think to carry out - think of the differing expectations of women in the police, the army, the fire service, for instance.

In the classic Alien films, Ripley – the first real female action hero – sacrifices herself to save the human race in a very chivalric, Christ-like (greatest hero of western society) way. I find it hard to imagine a female author coming up with that, a woman laying down her life for strangers. It just wouldn’t occur to them. And in the past it would never have occurred to a male writer either. Women’s bodies are a precious rare resource to be protected at all costs by the men, even at the cost of the mens own lives. That sacrificial role is a male burden, & a male fantasy, but one is now rather strangely being projected onto a female canvas.

Feminism has really messed with our heads.


Although some women might be consumers of heroic violent action movies with female protagonists, they don’t choose to create them themselves. It’s not like Jane Campion or Miranda July (two directors I hold in some esteem, by the way) are working on writing & directing a female Die Hard.

I mentioned the military, fire service & police earlier not to say that no women serve in such capacity, only that they are not serving under the same expectation to sacrifice themselves in the way their male counterparts are. Around 20% of the US armed forces are female, yet 97% of the troops that died in Iraq were male, & of the 3% of the troops that died that were female, more than a third of them died from other causes than combat. It has been said (with only a little exaggeration) that serving in Iraq is one of the safest places for an American woman to work.

Same happens in the police force. Female police officers overwhelmingly take the safer day shifts & on the beat, particularly in less safe areas, are almost always accompanied by a male officer, who’s unspoken role is to protect her. This has been looked at with concern in the past as it doubles the danger for the male officer, who has no one along for the ride to protect him. Of the 4000 deaths of police officers in the UK, 3956 of them are male, while only 44 are female, even though women now make up 25% of police officers on the beat & 62% of staff.

In the fire service, again, there are female firefighters, but hardly any. In the U.S. it’s about 2%. Women are not attracted to dangerous work generally, jobs in which they daily run the risk of death. Which is why, even though women now hold the majority of all jobs in the USA today, over 95% of all deaths at work, across the board, are male.

To restate my point perhaps more clearly, I am not addressing ‘strong female characters’ but rather female characters carrying out the traditional male heroic role of willingly sacrificing themselves for the tribe, for the greater good, for everyone else.

These figures, to pretty much all intents & purposes, don’t exist (as I say, the only one I could think of was Alien's Ripley), but when they do they are written exclusively by men, who are, it seems to me, projecting their own innate set of heroic values & behaviour somewhere where they do not occur in real life. Women in the real world do not, as a very strictly observed rule, sacrifice themselves for a bunch of strangers.

There’s a case to be made about how this is because of the females greater biological imperative for self-preservation {"MustSaveMyself&MyChild"}. If there are any instances of a woman writer portraying her female protagonist sacrificing herself it will almost certainly be for an immediate family member, a younger sibling or child most likely, rarely for her husband or lover & never for the greater good of all, for wider society. This is not a condemnation, it’s just the way things are: Neither men or women see women as being expendable in that way.

The only exception to that rule I can think of is a Thelma & Louise type story where (spoiler!) two women would rather drive off a cliff than live in a world with men in it. This, however, is obviously ideologically driven & shows only how ideology can make us perform strange, unhinged, fanatical acts. Thelma & Louise’s actions are essentially self-serving – the best you could say is that they are a personal protest about how they feel about their situation in the world – they are not done to save anyone else, the people of their tribe or the world. Even their staunchest defenders would have to admit that Thelma & Louise are not sacrificing themselves to save the men of their community.

This seems to me a fundamental natural difference between the sexes, but one which, due most likely to present day PC teachings of the interchangeability of the sexes, is increasingly obscured, giving us wildly unrealistic expectations of each of the sexes roles, motives & capabilities that aren’t based upon anything in nature or our daily reality.
Posted by Byron at 16:36