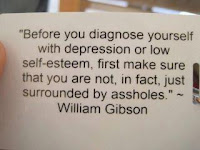 It is surprisingly easy to find yourself cast out of pretty much any ideological belief system.

The way to discover whether you are IN an ideological belief system - whether you are, in fact, part of a batshit crazy cult - is simply this: Disagree with it.

Go on, try it. What's the worst that could happen?


Well, the worst that could happen, it turns out, is this: the great majority of everyone you know from within that belief system will now not only want nothing more to do with you, but will also go around telling everyone else you used to know what a Bad Person you now are.
The unfortunate fact of the matter is - & yes I know you know this already, but watch me do my thing - if you speak out on behalf of the human rights of men & boys in public discourse, if you want to at least consider treating men & boys with even a smidgen of the compassion & concern we have always accorded women & girls, you will discover, with little delay, just how terrifyingly at odds you are with not only the present state-enforced laws & beliefs of your society, but even the hardwired impulses of your own biology. We evolved to put women & children first, & indeed most likely wouldn’t even be here if we hadn’t, or at least not in anything like these numbers. And for all our talk of equality, little of that has, will, or can change.
Male disposability was, of course, around long before feminism appeared - there is no society which sends its women off to war while the men stay home & play with the children, no society where the women get sent down into pitch-black mines nine hours a day, every day for the rest of their lives, or are made to go try kill ferocious people-devouring animals for others to eat while the men pick berries. But this innate lack of compassion for men was never exploited to anything like the degree it is now, & in such a gleefully callous fashion.
Men of the past were at least accorded some degree of gratitude for their service & sacrifices— a father who chose to stick around & care & provide for a woman & the children she bore was once reserved a position of dignity in his community at least a little higher than, say, Homer Simpson. If he got divorced he could still expect to keep the children he was providing for. A man who went to war to defend his country from invasion was thanked when he came back & told he was a hero, not a baby killer. A man who succeeded at business was thought a hard worker & a good catch, instead of a male chauvinist pig who needs to check his privilege.
That hatred, & the lies & propaganda which feed it, emanate from a single source, a single set of narrative assumptions about the world that had never been expressed by anyone until around 100 years ago, & the past 40 or 50 in earnest. And if you’re here, well, you already know what name that set of assumptions goes under.
The nature of all ideologies is that those within them do not perceive what they believe in as ideologies but simply The Truth: Christians, Atheism+ fanatics, Marxists, Nazis, Feminazis, Freudians, & 9/11 conspiracy buffs... what these seemingly wildly differing positions have most in common is an inability to see the limits of their position. And also the unshakeable belief that 'if you’re not for us then you’re against us. And if you're against us, then you deserve everything you get. In fact, you deserve everything we're going to give you, you fucking scum...'

To fix the popular atheist slogan, it is only ideology that can make good people do bad things.
The reaction of sheeplike followers to any independent thought which contradicts the tenets of their beliefs is always that the person saying it must be a Bad Person. If you contradict the teachings of Christianity? It is The Devil talking. The only reason you could ever possibly want to criticize Communism is that you hate the working class. If you point out the hate speech & absurdities inherent in the Nation Of Islam, it must mean that you hate black people. And if a person criticizes Feminism, then they must hate women. Right?

After all, there’s no other possible explanation, is there?
And so the pack turns on the individual, to stop them saying those troubling things: Troubling things leads to cognitive dissonance & that makes me feel bad. Why would you want to make me feel bad? You must be a Bad Man.
And so it goes.


*
I imagine there must be a moment in everyone’s life, even if they don’t now even remember it, when they first asked that question they shouldn’t have, when they spoke out of turn, said out loud a thought that was theirs alone, instead of simply repeating what dogma they have been taught up to that point - & immediately saw how inappropriate & deeply unappreciated whatever they had to say of their own was considered by the body of believers around them.
When that happens - & it will, at some point, to just about everyone - the great majority of people will simply say 'OH! I see I was wrong to say that, I apologize, & I'll know not to say that, or even think that, in future." We learn pretty fast, what to say & what not. As I’ve said elsewhere, the price of conformity is the loss of individual thought; the reward for conformity is love, acceptance & support. Most human beings, naturally, would like both. But if it comes to it, 19 out of 20 of us will always choose the latter.
And there’s the rub: say I want to continue working towards halting the ecological destruction of planet earth. That seems to me to be an empirically worthwhile activity to devote at least some of one's life to - dependent on the details, obviously, & the likelihood of success, on a case by case basis. But you're not going to get very far trying to do that all on your own, so you have to try work with others. The problem is, once you start doing that, once you involve yourself with other people presumably motivated by similar intentions, you find within that - or any - movement there is a shared set of laws you didn't know were there when you first signed up. Political Correctness is ideologically created, state-enforced morality & there is no greater threat to basic human freedoms of thought & expression than the acceptance of PC authority. But the people who make it their stated aim to overthrow state-control also happen to be its biggest supporters.
I spent most of the past 20 years surrounded by people I thought were the most open-minded, truth-seeking individuals in the western hemisphere. Feminism, unfortunately, was a part of that shared worldview, as it is for most of my generation - one of those unchallenged assumptions that makes an ass out of u & me.
Some of those unspoken assumptions were simple, golden-rule common sense: do unto others as you would have them do unto you; Be Kind, be fair, work for the good of all humanity rather than just thinking of yourself. Stuff like that. But some of the beliefs seemed to get a little more rigid & specific over time, leading to concepts such as ‘The Patriarchy’, ‘Male Privilege’, ‘Positive Discrimination’ & the ‘Female-Safe Spaces’ needed because of the ’Rape Culture’ & so forth & so on, without a great deal of thought given over to where any of that repugnant shit originated. The language of Political Correctness & feminist hate just sort of appeared like mist, like the morning dew, & one day we woke up covered in it. Or I did, anyway. Woke up, that is.
The thing about any ideology is, & I'll wrap it up now, that you very rarely realize there is one there until you disagree with it. And the thing about life is that it is bigger than any ideology, bigger than any idea we can have about it, any ultimate explanation for it we can attempt to give. All definitive explanations invariably come to obscure the wild & shaggy uncertainties of life.
I’m as guilty of this as anyone, & I still can feel myself fall into those habits now just the same as when I was a feminist. I mean, I hopefully know at least a little about what I’m speaking of now, & my positions these days are based on more than just emotional haranguing & white knight indignation. But the only really obvious difference I can see between my life now & my life then is simply that people treated me a lot better back then.
But what can a poor boy do? You can’t start believing in things you now know to be lies. You can’t go back to believing in Santa Claus when you’ve white hairs growing in your own beard.
Awww, fuck it. They crucified Lenny Bruce too.