Men As Victims Of Domestic Abuse


SCOTTISH men suffer as much physical and psychological abuse from their partners as women, shocking new statistics reveal.

The 2008/2009 figures, which were part of the government’s Scottish crime and justice survey, have shown that in cases of abusive behaviour, 48 per cent of offenders were men and 45 per cent were women.

In comparison to 34,000 women, 39,000 Scottish men have experienced abuse from their partner.

Flawing any preconceived notion that abuse is mainly a woman’s concern, the statistics have encouraged the government to take a closer look at the country’s policy for domestic violence.

With only eight per cent of abuse cases reported to the police by men, and 35 per cent reported by women, the subject’s taboo nature is an evident one.

Campaigners say that the fear of not being believed by the authorities or losing access to their children contribute to mens’ reluctance to tell their tale.

Alison Waugh, a founding member of Men in Scotland, a charity supporting male victims of domestic abuse, said that men in abusive relationships had been ignored for far too long.

Calling on men to come forward, Waugh said: “The figures show that there is not as big a difference between the level of abuse men and women suffer as one would expect.

“Yet it has largely been seen as a problem that happens to women, and abuse of men has become a taboo subject.

“Men can be seriously affected by it for decades and it can ruin their lives.”

Campaigners are now calling for a greater focus on abused men, with the back up of public information campaigns and support services.

Already, steps are being taken to bring the matter out into the open.

A helpline for abused men has recently been launched by Alex Neil, communities’ minister, and he is not ruling out the possibility for a television advertising campaign on the issue.

Advocating the subject’s importance, Neil said: “There is no doubt in my mind that domestic abuse against men is not only a significant issue in Scotland, but also a growing problem.

“It would be a dereliction of duty for us not to recognise that and to respond accordingly.
“Working with all other parties in the parliament, the government intends to ensure that we tackle the problem head-on.”
With reported cases of domestic abuse on the rise in Scotland from 49,655 in 2007-08 to 53,881 in 2008-09 the call for better support measures could not come at a more crucial time.


source: Deadline Scotland
Posted by Byron at 15:06 No comments: Links to this post

The marvellous Erin Pizzey, founder of the world's first domestic violence shelters, from a debate at the Oxford Union in response to the question "Did middle class women betray the feminist movement?"

Yes they did. There never was a feminist movement. A bunch of disenchanted women refused to support their left wing men who were fighting capitalism. They changed the goal posts and said capitalism was no longer the battle ground it was now 'Patriarchy' and declared war on all men and the family. The new utopia was to be women and children only.

Read what Professor Ruth Wisse, from Harvard has to say:

"Women’s Liberation, if not the most extreme, then certainly the most influential neo-Marxist movement in America, has done to the American home what communism did to the Russian economy, and most of the ruin is irreversible. By defining between men and women in terms of power and competition instead of reciprocity and co-operation, the movement tore apart the most basic and fragile contract in human society, the unit from which all other social institutions draw their strength."

I believe that we stand on an abyss in the last two years of this dark century. Those of us that believe that the family is the cornerstone of any civilisation are embattled with feminist forces that seek to destroy the role of men in the lives of women and children. In 1971 I opened the doors of the first shelter for victims of domestic violence in the world. Men, women and children came to my door. The feminist movement, hungry for funds and public recognition, hi-jacked my movement and turned it into a war against men.

The feminist movement’s agenda was to declare all men as potential rapists and batterers. Under cover of the shelter movement which gave them funding and accommodation to wage their gender war against men, they began to disseminate misleading information. Legislation against fathers was put into place and family courts became hostile to men.

Horrified by these atrocities, I travelled to America and tried to make my views known. NOW issued an edict warning all NOW groups to ignore my arrival. A film of my work (the first film on domestic violence in the world), was fronted against my wishes by Gloria Steinem thus putting the film into the feminist camp. My book ‘SCREAM QUIETLY OR THE NEIGHBOURS WILL HEAR,’ was plagiarised by a feminist writer and her book became the feminist bible on domestic violence. The poison spread throughout the country and the media also became hostile to the traditional family and fathers.
Over the last thirty years people in the western world bowed meekly to the savage onslaught meted out by this hate-crazed movement. Feminists declared a ‘gender war,’ against men. This war, bolstered by legislation, ignored the reality of domestic violence and insisted that only men were perpetrators of violence against women.
The suffering of men who are physically and sexually abused and stripped of their right to have access to their children goes largely unnoticed. In the future, new legislation must recognise that a traditional family, the biological mother and father living under one roof with their children, offers those children the best possible chance of becoming healthy, loving, law abiding adults.
Those women who love their husbands, partners and sons must join with the men’s movement in seeing that anti male legislation never gets passed. This is our last chance to right a horrendous wrong. Millions of men and their children have suffered in the hands of this evil feminist movement. The time has come for men and women to say "NO" to feminism.
Posted by Byron at 14:23 No comments: Links to this post

Posted by Byron at 11:51 No comments: Links to this post 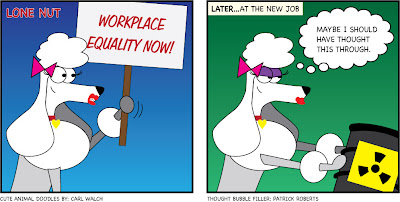