Purple Rain sold the most, and Sign ‘O’ The Times is widely considered his greatest artistic achievement but for my money, Parade is Prince’s most perfect album.

After the hard rock of Purple Rain and the 60s psychedelica of Around The World In A Day, Parade returned to the robotic funk of his roots but with a palette of exotic orchestrations and a new skinny, honking horn sound on tracks like ‘Girls & Boys’ and ‘New Position’ that seemed to hark back to the 1930s as much as the black and white movie he directed, Under The Cherry Moon, which these songs were ostensibly a ‘soundtrack’ to. Like Hemingway, Prince’s great secret was his discovery that taking things out made what you left in all the more powerful, and tracks like ‘I Wonder U’ are barely there at all, and all the better for it.

It’s easy to forget but Parade is essentially Prince’s only great ‘concept’ album, in that it begins with a parade for ‘Christopher Tracy’ - his character in the movie - and ends with a song mourning that fictional character's death. And every song along the way is perfectly formed and seamlessly slides into the one beside it like threads in a Persian tapestry, most triumphantly at the point ‘Life Can Be So Nice’ kicks in. The great songs for me are, obviously, Kiss, but equally Girls & Boys, the soaring, immortal ‘Mountains’ and his most paradoxically heartfelt ballad, ‘Sometimes It Snows In April’. But, probably more than any other of his albums, this one needs to be heard in its entirety every time.

As an afterword, I really have to add a youtube video isn’t the best way to hear any of these records, and should be used only as an low-res sampler for you to get a hard copy of the real thing, ideally on vinyl, at least until a decent remaster comes along.

Posted by Byron at 13:10 No comments: Links to this post

This was the strangest of Prince’s imperial phase of 80s records, a swirling psychedelic extravagance completely out of step with everything else going on that decade, and as the follow-up to the phenomenally successful Purple Rain album, its indulgences confounded most listeners who judged it a failure and so it sold far less, even though it contains the immortal ‘Raspberry Beret’ and the lesser known but equally perfect ‘Pop Life’.

That last song is the one I always used to sit people down with and ask, with all the surging orchestra of sounds, all speeding up and slowing down, coming in and going out - and all played by him (with the exception of the finger cymbals, if I remember correctly)…  which instrument did he play first? I finally figured out years later by process of deduction it had to have been the piano, but that doesn’t make it any less inexplicable or extraordinary.

I saw a nice video today where black writer Marc Bernardin made the insightful statement that growing up in the 80s Prince was to black kids what Bowie in the 70s was to white kids, and that’s so true: At a time when being a black man on MTV meant you were either Luther Vandross or Run DMC - both very narrow and confining models of masculinity - Prince was as much The Beatles and Liberace and Joni Mitchell as he was James Brown and Funkadelic. Prince alone demonstrated you didn’t have to be anyone but yourself, that you could dream up the life you wanted to live and the person you wanted to be and make it real.
Posted by Byron at 12:33 No comments: Links to this post

Not ideal sound quality but good enough for the genius to shine through.

For the uninitiated saplings wondering what all the fuss is about, my recommended cuts are first of all Sign O The Times itself and then the run of If I Was Your Girlfriend, Strange Relationship and I Could Never Take The Place Of Your Man, which no-one ever talks about but for my money has his best ever guitar work  - yes Purple Rain is a better solo but the strange, winding odyssey he goes on before coming back to the hook at the end is so detailed and sublime, and even more extraordinary when you remember that’s him sat behind the drum kit, that’s him playing bass, that’s him singing backup, that all of this was dreamt up and brought forth in real time by a solitary human being without a computer.

Unlike the other great pop stars of the 80s, Michael Jackson and Madonna, who never played a note on their records - or even Springsteen, who played guitar and wrote the songs but was at the mercy of his band as to how they ended up - every instrument, every note, every harmony, every brush stroke along the way was all played by one man, a painter at his easel, alone in a room with his boundless imagination, 30 years ago. Nothing ever sounded like this before. Or, let's be honest, since.
Posted by Byron at 11:32 No comments: Links to this post

Sometimes It Snows In April 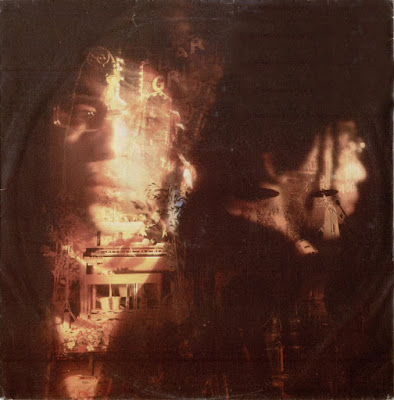 All my heroes seem to be dead or dying.

This is nothing new or profound, of course - we're all dying - but there's just been so god-damned much of it lately. It's just left me kind of numb, but still wanting to offer up some words to the universe of what this man meant to me, to bear witness to what he made of worth in the time he was here. Today. On the day he died.

So here goes. Here's what Prince Rogers Nelson meant to me.

Between 1980 to 1987, Prince was simply a god, a mysterious, divine being creating impossible and unfathomably great music that I've only ever been able to describe as "a spaceship coming into land atop the great pyramid in ancient Egypt carrying James Brown, Jimi Hendrix and Bootsy Collins jamming away on alien technology while everyone below peaks on Ayahuasca". I'll stand by that.

And, of course, it goes without saying, he did almost all of it completely by himself. He played almost every instrument, sang almost every harmony, produced arranged composed and performed the lot. This is long before laptops and ProTools: no other rock star was doing this in the 1980s. No other rock star ever did that before.

Prince in later years would fitfully make some very nice pop songs here and there but he was never truly great like that ever again. And I've spent a lot of hours over the years trying to figure out why that was, at what precise point he lost hold of the holy grail. I once even begun writing a short story about it, about that moment, which I placed sometime in 1988, when walking around his mansion looking out at the snow falling around his perimeter fence he just said 'fuck it, I've done enough'. I doubt very much I'll ever finish it now. It was going to be called 'Winter In Minneapolis'.

Part of me wishes he'd just walked away at that point, and lived a silent recluse like Garbo. It's too much to ask, of course, but it would have been so perfect, and left so little explaining to do. Life is perfect only in brief moments, it seems. Never lifetimes.

After a long dark night of the soul, never explained, between 'The Black Album' and 'Lovesexy' he lost the dark, chilling obsession that drove his greatest work. He could never do confessional - too vain and calculating - and the lyrics of his songs were seldom as profound as he wanted to think they were, but in songs like 'Something In The Water', 'Automatic', 'If I Was Your Girlfriend', 'Darling Nikki' and 'The Beautiful Ones', he went so deep into the physical, into lust, into the maniacal excesses of our secret hearts, that he reached something shocking in its purity and truth and eternal in its revelation. And it's those glimpses of something beyond ordinary human articulation the people who truly know are talking about when they call him a genius. Because that's exactly what he was. Back then, anyway. Not an entertainer. Not a pop star. A genius.

But Prince was also the greatest pop star of the 1980s - what Bowie was to the 70s and, I would say, Bjork was to the 90s: a genius at the peak of their powers making their very best work while the world was paying most attention. His greatest artistic achievement was 'Sign O The Times', and 'Purple Rain' sold the most, but his most perfect album in my estimation was 'Parade' - the breathtaking audacity of that non-stop stream of glorious songs woven together like the finest tapestry constructed out of light and sound. It hasn't aged a day. Like the best of his work, it still sounds as rapturous and intoxicating and indefinable as the day it first appeared.

My first thought when beginning writing this was simply to add a big stack of youtube clips of his greatest works and let them speak for him instead, but this sadly proved impossible: Prince is practically unique amongst pop stars in that there is just about none of his music anywhere on youtube or elsewhere on the internet. It's another one of those maddening control-freak parts of his later years, him setting his lawyers on any fan who uploaded his music to the net.

But here's what I would have played you, if I could have - my one-stop best-of Prince & The Revolution:

Then there are the lovely lesser songs like Cream, Sexy MF, It, The Other Side Of The Pillow, Willing and Able, Don't Play Me, The Truth, Can't Stop This Feeling I've Got, Still Would Stand All Time, Pussy Control, I Wanna Melt With U, Letitgo, The Holy River...

And all the songs he gave to others, like Nothing Compares 2U, The Screams of Passion, Manic Monday, everything by The Time and Sheila E. So many songs, in so short a time. It suddenly seems so obvious now how impossible it is to imagine him old. He was never meant to grow old, to wither and wrinkle and fade away.

But I'm glad I lived in his age and alone out of everyone I knew growing up, had that secret knowledge of a world of fantasy and imagination and bottomless desire. This has been me saying thank you for that. Thank you Prince.

Sometimes it snows in April
Sometimes I feel so bad
Sometimes I wish that life was never ending,
But all good things, they say, never last.

Sources:
Kotaku Writer Paid $800 To Dev He Was Sleeping With, Without Disclosure
http://blogjob.com/oneangrygamer/2015...

Proof of Nathan Grayson's Lack of Disclosure
His name is in the credits of Depression Quest:
https://archive.is/2RrcW

Proof #GamerGate is not a hate group or a harassment campaign
https://archive.today/frmoI

#NotYourShield Video
https://www.youtube.com/watch?v=SYqBd...
Posted by Byron at 21:57 No comments: Links to this post

Email ThisBlogThis!Share to TwitterShare to FacebookShare to Pinterest
Labels: gamergate

The Regressive Left has Become the Religious Right

Great vid by Sargon of Akkad

Posted by Byron at 16:54 No comments: Links to this post