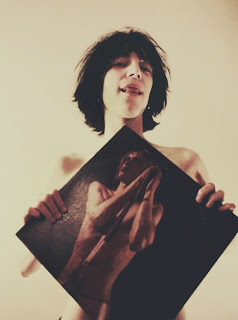 One of my biggest inspirations has always been the incomparable high priestess of punk, Patti Smith. Her 1975 album Horses I would happily place in any list of the top 10 rock albums ever, & between then & now she has walked her own path, with only her own compass for a guide, a ferociously individual voice mixing up the languages of poetry & prayer with the swagger of Rimbaud & the sway of the Rolling Stones.

In the seventies it became common for lesbians to (wrongly) claim her for one of their own simply because of how often & convincingly she wrote of desire from a male protagonist's point of view. Similarly, many feminists even today consider her a poster child for their batshit crusade simply because she was strong woman with her own opinions who didn't wear powder on her nose & a gingham skirt. In actual fact, as with the other truly great female artist of the rock age, Joni Mitchell, she strongly resisted such co-opting by that movement &, like all great artists must, put her artistic vocation above her politics, her sex, & her times. This Penthouse interview from 1976 puts the record straight:

Has the women’s movement had anything to do with your growth as a poet?

Smith: No. I remember getting totally pissed off the first time I got a letter that started off with “Dear Ms. Smith.” A word like Ms. is really bullshit. Vowels are the colors and souls of poetry and speech. And these assholes take the only fuckin’ vowel out of the word Miss. So what do they have left? Mzzzzz. It sounds like a sick bumblebee, it sounds frigid. I mean, who the hell would ever want to stick his hand up the dress of somebody who goes around calling herself something like Ms.? It’s all so stupid.

I don’t like answering to other people’s philosophies... I like who I am. I always liked who I was and I always loved men. The only time I ever feel fucked around by men is when I fight with a guy or when a guy ditches me. And that’s got nothing to do with women’s lib. That has to do with being ditched.

I don’t feel exploited by pictures of naked broads. I like that stuff. It’s a bad photograph or the girl’s ugly, then that pisses me off. Shit, I think bodies are great.

Every time I say the word pussy at a poetry reading, some idiot broad rises and has a fit. “What’s your definition of pussy, sister?” I dunno, it’s a slang term. If I wanna say pussy, I’ll say pussy.

I’ve never felt grounded because of my ancestry or my gender. I think until women get away from that they’re not going to be great writers... What Erica Jong and people like that lack is rhythm, rhythm and strength. They write only boredom, pages and pages of fidgety self-examination.

The French poet, Rimbaud, predicted that the next great crop of writers would be women... And I believe in that completely. But hung-up women can’t produce anything but mediocre art, and there ain’t no room for mediocre art.
Posted by Byron at 21:55 No comments:

Who Taught You To Hate Yourself?

It's so rare to see such a positive statement about Men's Rights. More of this kind of thing!