The Burden Of Being Male


Karen Straughan at Ryerson University, March 2, 2018
Posted by Byron at 14:48 No comments: Links to this post 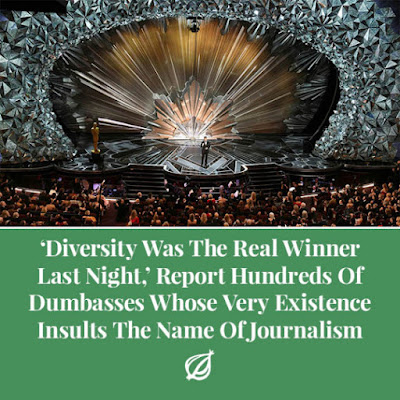 LOS ANGELES—Gushing that yesterday’s Oscars had changed the face of Hollywood forever, hundreds of total fucking dumbasses whose very existence insults the name of journalism reported Monday that “diversity was the real winner last night.” “On a night traditionally filled with glitz and glam, it was race and gender equality that finally had their moment in the Oscars spotlight,” wrote countless slathering dipshits, who, by publishing surface-level puff pieces claiming that “new voices had triumphed on the biggest stage in Tinseltown,” upended the very foundation on which journalism was based. “Inclusion stole the show last night in a dazzling spectacle that proves once and for all that outside voices are the real up-and-coming stars. In many ways, it wasn’t A-list celebrities who deserved a standing ovation yesterday, but representation itself.” At press time, the bumbling oafs continued to degrade their profession by declaring that, in many ways, America was the true Oscar darling.

Posted by Byron at 10:16 No comments: Links to this post