So I just came across this madness again today as an advert for International Women's Day, & yes I know that's long over now but don't rush me - I was built for comfort, not for speed:

I ask you, gentle reader, in the name of all that is holy & yet sane, to step back from that endlessly regenerating leviathan of hyperbole for just a second & think about it objectively with me.

First of all: 66% of the world's work? What the fugazi? Men work far longer hours & the overwhelming majority of all overtime, everywhere in the world, whereas women work the great majority of part-time jobs (which in itself goes a long way towards explaining the perceived pay gap, by the way, as part-time jobs obviously pay less than full-time). That 66% figure can only exist because it is counting cooking, cleaning & childcare (activities that any adult human being living without a partner would have to carry out for themselves anyway) as 'work'. But let's leave that aside. That's not the part that levitated my gander.

What pisses me off most about this is the now widely-indoctrinated worldview that women & men are two separate, opposing camps, each of us isolated units working only for ourselves - a pretty ugly delusion in itself - instead of the historical reality, which is men & women living together, supporting one another & feeding, clothing & protecting the children who will grow up to replace them.

That, in essence, is the human story of the world, not any 'patriarchy theory' poppycock. The history of the world is far less the story of 'male privilege' than of men generation after generation ceaselessly labouring & sacrificing themselves for their women & their children, for their tribe, for the good of all.

The uneven division of labour that gave women the less hazardous & strenuous role was a kindness to women, a reflection of shared values that saw women as having value outside of just cogs in a corporate machine, wage slaves like the men were forced to be. But since feminism & identity politics began, we have become accustomed to identifying ourselves as smaller & smaller victim groups, at war with all around us, & encouraged to look out only for ourselves.

The word 'Equality' went from meaning equality of opportunity - the removal of barriers or special treatment preventing a fair race - to equality of outcome, where barriers & special treatment became necessary to ensure that everyone reached the finish line at the same time. 'Equality' became a set of bean-counting scales where the outcome of all endeavors had to always balance out or else someone, somewhere, was cheating & oppressing you.

On this side, this pile of beans represents all the beans that men have made - to support, & be spent by, women. On that side sits the smaller amount of beans that 'women' - all women in the world, all put together - actually went out & acquired for themselves. A woman who doesn't have to work because she & her children are being provided for by a man doesn't technically have an income at all, but surely we can see she is not being discriminated against or disadvantaged by the man working for her, as his money is what she is using to buy everything she has. Is this really not obvious?

From that same position, that isolated model of existence, where only the individual is counted, without any context, one could just as easily say:

Children! Stand up & fight against those caring & providing for you!


And we may be seeing that any day now. To take another statistic, also found on several feminist sites:


"Women make 85% of all purchasing decisions, spend almost 2 of every 3 healthcare dollars, influence 68% of all new car purchase decisions and control two-thirds of the nation’s disposable income".

You're confused. Okay, let me walk you through this. Say your husband is... oh, I don't know.. a CEO of some multinational corporation, or a high-price lawyer, a rock star: you don't need to work at all, yet you 'have' half of whatever he makes through his work, & you actually spend much more of it than he does, & get to decide what on. You don't 'make' more, so it won't show up in the statistics. And yet you're going where you want to, you're shopping with a gold card & having your nails done by the pool. You're not 'earning' anything, statistically speaking, but you're in no way being disadvantaged by that situation, any more than the Queen of England is being oppressed or disadvantaged by not getting to work part-time in a corner shop.

On a less blatantly obvious scale, this is being played out by a hundred million married couples all around the world, where - especially after having children - the woman decides to stay at home with the kids, or begin to work part time, or at least clock off at 4:30 on the dot. The man, on the other hand, is much more likely to work even harder, now that he has both a wife & children to support, so works longer hours, & overtime, all to put his kids through college & keep his wife in the style to which she is accustomed. He's 'earning' more than her alright, but is his life any better? Is he privileged & 'empowered' by this? Who, if anyone, is being exploited or disadvantaged by this set-up?

That primary feminist factoid we hear regurgitated everyday - that "women are paid 70 cents for every man's dollar" - makes little sense when you look at it up close. Say you & a friend of the opposite sex go apply for the same entry-level position at, say, Starbucks, or 7-11, the post office, a bank. The manager sees you both in his or her office & says:

"You, male person, we are starting you off at £10 an hour. Whereas you, female person, will be receiving £7 an hour. Okay? Good, now off to work with you both!"

Have you ever seen that happen? Does anyone seriously believe that EVER happens? Of course not, but in case anyone running a business would for whatever bizarre reason decide to try to do so, we have laws against it. Did you know that? Laws! Yes! For years!

Another thing: if women are existing on only 11% of the world's income, then we'd expect to see the great majority of homeless people to be female, correct? The people who have the least? But no, 80-90% of the homeless population of the world - by definition, surely, the very bottom of the heap: they literally, after all, don't even have a bed to piss in - are male. Where do they fit in to the equation?

The reason feminism was accepted so readily into both capitalist & communist states is because it aids those states more than the people controlled by them. More women in factories means more workers & more people to tax. If one half of the people can be convinced that the other half of the people are The Problem then that effectively diminishes any united resistance to the powers that be, & demonizes & diminishes the members of the populace most likely to actually take up arms & risk their lives to bring about any kind of dramatic, revolutionary change - i.e, the men.


Strong men, in the past honored & appreciated as warriors, we are now encouraged to consider only 'macho assholes' & gleefully disdain. Women, once treasured for their essential role as mother & nurturer, are no longer considered truly productive members of society unless they are wage slaves too. A big family living, eating & sleeping together under one roof generates far less revenue & taxes than all those people living apart, all paying separate rent & taxes, all buying food & paying bills just for themselves. All this helps the state, the banks, the factory owners. But not us.

As I've already said, this obsessive bean-counting completely denies & obscures the fact that most human beings live today as they have always lived: together, as fathers, mothers, daughters, sons, brothers, sisters, aunts, uncles, lovers, neighbours & friends. This is what we truly are, & what we must strive to preserve if any kind of collective human existence worth living is to continue.

The pay-gap delusion refuses to die, though common sense should have killed it before it even began, all those years ago. Me saying this will make very little dent in it, of course, but by Vishnu's beard, it annoys the hell out of me.

Further Reading:
The '66% Of The Work' Statistic Explained & Debunked
CBS NEWS: The Gender Pay-Gap Is A Complete Myth
Gender Differences In Overtime
Warren Farrell on 'Why Men Earn More & What Women Can Do About It'
Posted by Byron at 14:30 3 comments:

Please check out this paper by Murray A. Strauss, which examines both the undeniably reciprocal nature of intimate partner violence & the reasons that information is continually suppressed:
http://pubpages.unh.edu/~mas2/V75-Straus-09.pdf 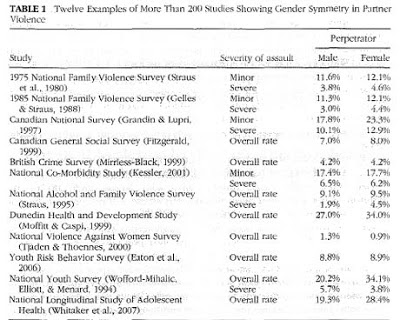 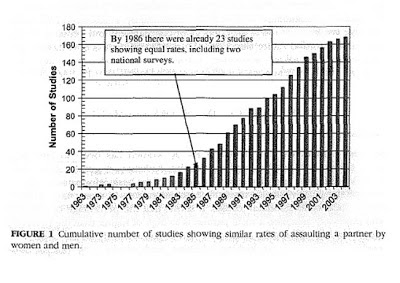 There is also an excellent, up-to-date bibliography of 268 studies showing that women are as physically aggressive, or more aggressive, than men in their relationships here:

Both are good resources to bookmark for research & debate.

Yes, everyone has seen those god-damned interminable "I need feminism because..." pictures plastered all over the interweb, but here's a pleasing spin on them I've just discovered. It's heartening to realize there are still at least some thoughtful, considerate & egalitarian-minded wimminz left in the world: 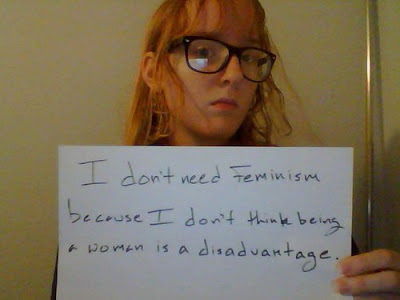 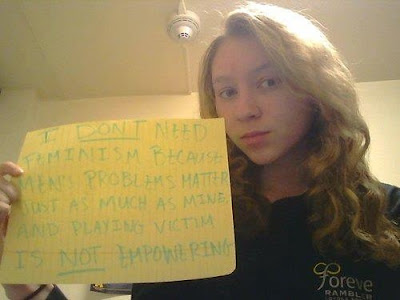 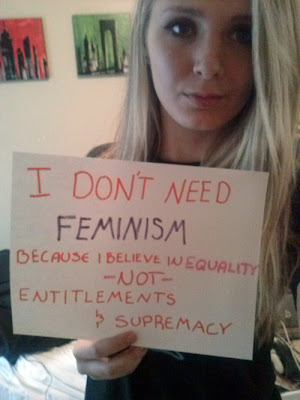 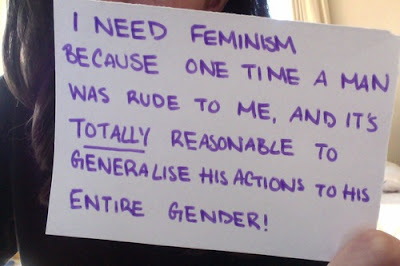 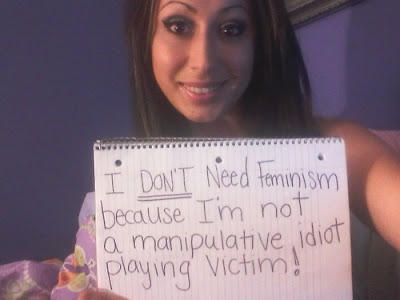 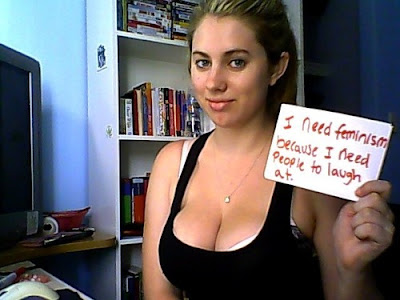 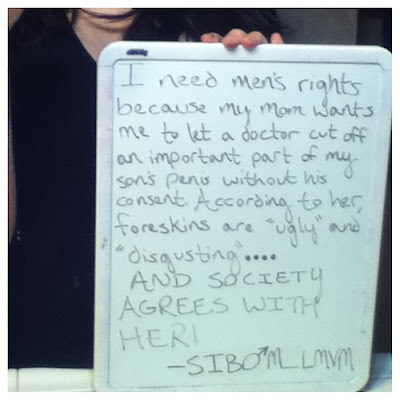 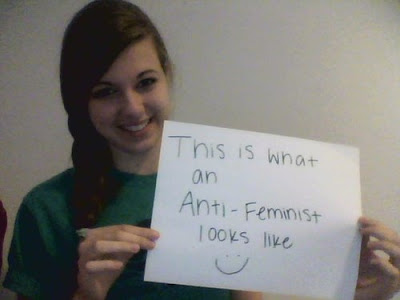 Email ThisBlogThis!Share to TwitterShare to FacebookShare to Pinterest
Labels: Feminism

Feminist Activist Makes Up Her Own Rape Threats 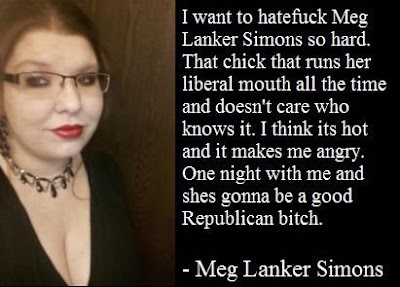 "Meg Lanker Simons is a feminist activist at the University of Wyoming. Unable to find enough evidence of any rape culture on campus she invented her own. Under an anonymous name she posted rape threats [such as the above] against herself on Facebook. The campus police investigated. She has now been charged with making a false claim of a threat."

I don't have much to add to this, it kind of speaks for itself. Googling her name brings up photos of a dumpy girl in a 'Take Back The Night' T-shirt.

Looking at her, I thought "who exactly is she taking back the night from?"

And the answer is, of course, herself, & the fevered nightmares she & others like her have had to invent to prop up their otherwise irrational hate.

It sure is a twisted, crazy world.

More on the story here:
http://kowb1290.com/meg-lanker-simons-cited-for-making-uw-crushes-post/
Posted by Byron at 09:56 No comments: